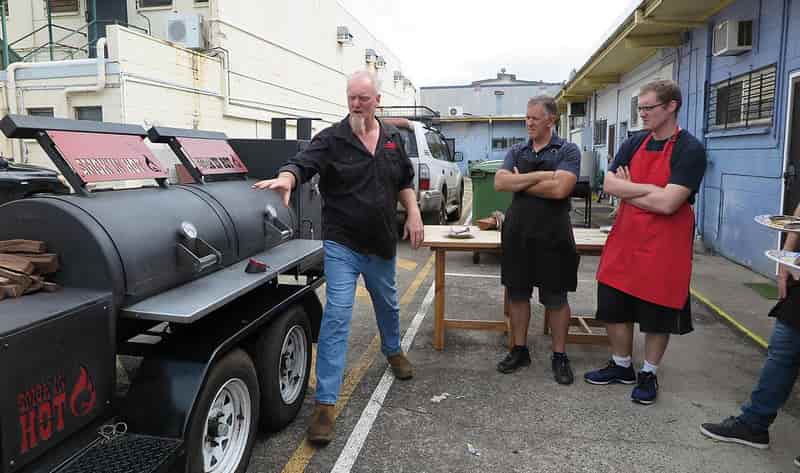 Smoked foods have existed since ancient times because smoking was one of the few ways to prolong their shelf life.

It is a technique that exposes food to the smoke caused by the combustion of wood without a flame, altering the characteristics of the food, prolonging its conservation, and modifying its taste.

The woods most used for smoking are those of oak and beech, which during combustion, release components such as formaldehyde, aliphatic acids, and phenolic compounds.

Before being smoked, foods are in most cases dried, salted, or bagged because in this way, the smoke penetrates more into the food.

Smoking is a preservation technique that exposes foods such as fish or meat to the fumes that wood, together with aromatic herbs, releases during a slow and incomplete combustion process i.e. without the flame.

Smoking does not involve direct exposure of the fish (or meat) to the flame but only to the fumes that this method of combustion releases, which contain particular substances that act as antibacterials and antioxidants.

These antibacterial and antioxidant actions, together with the elimination of excess liquids, have made this method of conservation a practice adopted all over the world for millennia.

Over the years, various methods and techniques have been studied and refined.

Cold: It is the technique that takes the most time out of the three. It needs a controlled temperature that, although it can vary, is generally around 20°C and can take up to two days. This technique is ideal for making food last longer.

Hot: This technique requires a controlled temperature which will have to be around 65°C or 150°F. The higher temperatures allow this technique to smoke for shorter times, even if only for a few hours.

By immersion: the technology today allows to transform the smoke from the combustion of wood into a liquid state.

In fact, there are processes that, thanks to sudden changes in temperature, transform the fumes into condensation, which is subsequently used for the immersion of foods to which we want to give the typical aroma.

At the end of the smoking process, it is good to create a mixture for cooling so that the food suddenly lowers its temperature, stopping the process.

To prepare this mixture, you will need to combine: 1 l of water, 2 kg of ice, and 1 kg of salt. After removing the food from the grill, seal them inside the special food bags, even better if you have a vacuum sealer.

Why do smoked foods last longer?

Smoking is a preservation technique based on the formation of substances with antibacterial and antioxidant action that develops during the incomplete combustion of wood and aromatic plants.

Furthermore, in the past, the temperature reached during the smoking process was high enough to significantly reduce the bacterial surface load.

Conservation was, therefore, the result of two actions that were triggered by the smoking process: physical, linked to heat and dehydration; chemistry, thanks to the development of substances such as formaldehyde, phenolic compounds, and aliphatic acids.

More than 200 chemical compounds have been identified in wood smoke, including PAHs (Polycyclic Aromatic Hydrocarbons), in particular, Benz (o) apirene and Benzo (a) anthracene, which must be monitored as they are considered carcinogenic.

The presence of these substances in smoked products depends on various factors, such as: – the quantity of oxygen in the smoking chamber: the more the environment is aerated, the less hydrocarbons are formed.

Direct contact between smoke and the product to be treated; – the production temperature of the smoke: high temperatures favor the formation of carcinogenic compounds.

For over ten years, Europe has set the maximum limits of PAHs that can be detected in smoked foods in order to guarantee the consumer a safe product.

How Long Does Smoked Meat Last?

If the meat is properly handled and stored, it can last 4 days in the refrigerator and 3 months in a freezer. Continue reading this article to unfold more information regarding smoked meat.

How long does smoked meat last in the Freezer? Once smoked and adequately cooled, the foods can be eaten immediately (apart from the cheese).

Once sealed in vacuum bags, they can be stored in the refrigerator where they will keep for 30 to 40 days (much will also depend on the type of food and whether or not they have undergone the salting / marinating process); or freeze them in the Freezer, in this way they will keep for about three months.

If you do not have the vacuum machine, storage times in the refrigerator will be reduced, and you will have to consume the food within 15/20 days.

The Mistakes Not To Make When Smoking At Home

By following all the instructions in this guide, you will be able to effectively smoke food at home in complete safety, without the development of harmful substances such as benzopyrene.

But there are some mistakes you shouldn’t make during this procedure:

In conclusion, we have proof that artisanal products are not always to be preferred over industrial ones since a home-smoked food is much more at risk of severe contamination by polycyclic aromatic hydrocarbons than another subjected to industrial smoking processes.