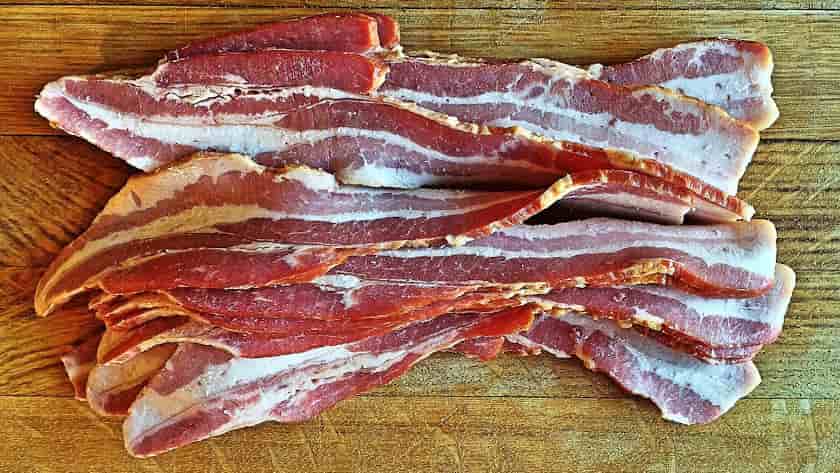 Bacon is a beloved breakfast staple all around the world. It doesn’t matter if you’re in the United States, the United Kingdom or Australia. Odds are high that you’re more than familiar with this cured meat and its flavor.

Although you may be familiar with it and its pleasant taste, you may not know a lot about its roots at all beyond the fact that it comes from pork. You may have absolutely no clue where it comes from within the pig.

It can help first to actually grasp the definition of the meat. This meat, in brief, is often extracted from the sides and backs of hogs.

Once it’s removed from the bodies of hogs, it’s dried, salted or perhaps even smoked. It’s typically sliced and then fried as well.

It’s a breakfast favorite in many areas of the globe and because of that is frequently seen right next to beloved foods such as hash browns, sausages and eggs.

Where Does Bacon Come From?

Pork bacon, is in most cases taken from the sides, backs and stomachs of the hoofed mammals.

It differs from many other pork varieties in that it’s not associated with any particular meat cuts. Bacon is essentially taken from any body part that features a significant amount of fat.

The sides, backs and stomachs all fit that description well.

Note, too, that this may vary based on your geographic location. If you reside in the United Kingdom, then you may regularly chow down on meat that comes from the back.

This option is especially popular in the Northwestern European island nation. If you reside on the North American continent in the United States, you may know a lot more about side or “streaky” bacon.

This kind is taken from the stomach of the animal. Don’t assume that all North Americans consume the meat in the same manner, either. Canadians tend to be keen on varieties that are produced using hog loin.

Have you ever heard folks from England waxing poetic about something called English back cuts? This variety basically is a combination of belly and loin meat.

There are varieties that are associated with perhaps more surprising parts of the body. Jowl bacon is an example. This meat comes from the cheeks of the animal.

Buckboard, perhaps strangely enough, is produced using the shoulders of the animal.

A More In-Depth Look at the Meat & the Hog Body

Once hogs are harvested, their carcasses are promptly “deconstructed.” People divide their bodies into various areas. These areas are the belly, the ribs and the loin.

Once they do away with the skin, ribs and loin, a level and rectangular portion remains. This part is referred to as the belly. Producers have to cut the bellies.

The aim behind this cutting is to make the sides totally straight. It’s to create meat that has a consistent appearance.

This pork is often thought to be a belly cut that’s made right next to the ventral line of the body. The ventral line involves the undersides of the animal.

While seasoned butchers are 100 percent aware of that, they frequently make exceptions. They sometimes produce cuts using pork bits that have absolutely nothing to do with the belly at all.

It can sometimes be a bit confusing for people to keep track of varieties and where they “originate” within the body. If you ask a butcher about slab choices, he’ll most likely present you with a cut that’s from the side.

Hogs often weigh anywhere between 200 and 220 pounds in total. Their carcasses, on the other hand, weigh a lot less. That’s because they’re devoid of any internal organs such as the intestines.

Hog carcasses typically weigh in at about 150 pounds or so. This weight covers lard, connective tissue and bones.

If you have a single hog, then you may be able to extract roughly 20 pounds of bacon from it. It’s critical to acknowledge, though, that hog bodies can produce all sorts of other widely known meat items.

You may be able to get 24 pounds of ham from an animal. Ham generally comes from the “rear end” area of a hog.

A Close Look at Cuts

Searching for delicious meat to put on your breakfast platter can be a pleasure. It can be particularly pleasant for people who know a lot about all of the choices in cuts that are out there as well.

If you take the time to study up on variety names, you may be able to get your hands on a cut that’s particularly appealing to your taste buds.

Streaky or side options are a biggie for fans of the meaty variety. This pork belly offering is remarkably fatty. It features lengthy fat coatings right next to the rinds.

Side bacon happens to be the preferred variety among people who live in the United States. Its charms aren’t lost on individuals elsewhere, though.

People in Italy call it simply “pancetta.” They serve it “aqua” or smoked. “Aqua” describes side cuts that aren’t smoked at all. It’s known for its intense taste.

Are you curious about back varieties that are on display at the store? People in the United States like to call them Canadian, rasher or just Irish. This category is extracted from the loin that’s in the center of the backs of the omnivorous creatures.

What makes this variety worth mentioning? It’s simultaneously meaty and lean. It doesn’t have as much fat as different cuts do. Many people think that its texture is reminiscent of that of ham.

If you purchase meat from a store in the United Kingdom, odds are high that it may come from the back zone.

Middle varieties, true to their naming, come from the sides of pigs. They’re moderate as far as taste, fat amounts and expenses go. Their flavoring isn’t as intense as that of their side counterpart.

Jowl varieties, again, come from pork cheeks and are then both smoked and cured. Cottage options are lean meats that are available in slender slices.

They’re shoulder cut types that in most situations have oval forms. Like back bacon, they’re rather meaty. Producers cure this variety and then cut it up into round bits.

People who consume it usually fry or bake it when all is said and done.

Slab bacon, last but certainly not least, generally is somewhere in the middle of moderate and substantial in the fat level category. This option is produced using either side or belly cuts.

It’s sometimes produced using fatback as well. Fatback, in short, is the name of fat that comes from the top section of a side of hog meat. It generally is salted, dried and presented in strip form.

Have you heard of bacon joints? They come from the front parts of the animal. They have higher amounts of marbled fat. This fat is in the middle of the muscles.

People appreciate joints for numerous reasons. They often think they’re moist and tender in the mouth. They often believe that they’re bursting with welcoming taste, too.

Collar bacon is a part of the joint classification. It’s extracted from hog backs close to their heads. Gammon comes from the hind leg.

It’s often part of the “Wiltshire cured” grouping. Hock is a variety that’s extracted from pig ankle joints in the middle of their feet and the ham area. Picnic bacon unsurprisingly is taken from the picnic cut.

This cut covers the shoulder area right under the blade. Picnic bacon is a comparatively lean option. In spite of that, it has a texture that’s particularly firm and sturdy.

The majority of pork cut textures aren’t even close to it in this respect.

The truth is that there is no one be-all and end-all answer regarding where bacon comes from in a pig. There are a number of factors that come into play.

Geography is one. Taste preference is another. If you’re in America, you probably know a lot about the taste of bacon that comes from pig sides.

If you’re across the pond in England, Scotland or Wales, then you most likely grew up feasting on back bacon. If you have any preferences, you should pay attention to bacon names during your shopping trips.

Names can often provide clues that can help people figure out exactly what part of the animal gave them their mouthwatering strips.

When And How To Wrap Brisket In Butcher Paper

Does Power Smokeless Grill Really Work? Is It Worth It