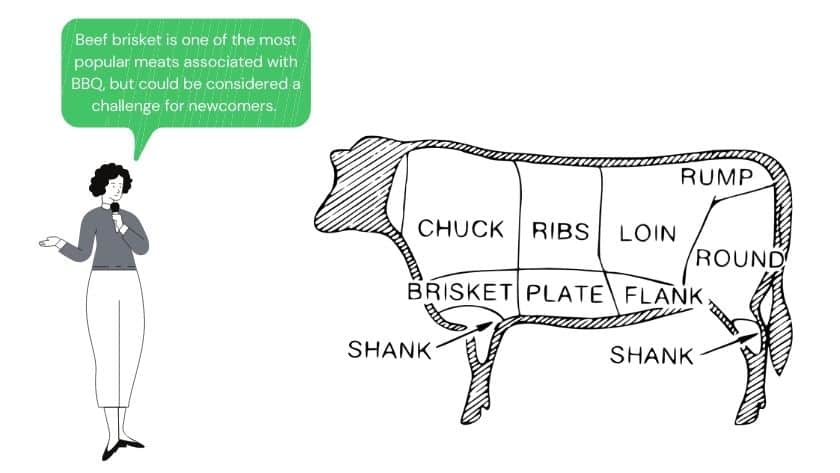 There can be several reasons why BBQs are one of the most popular social gatherings in the world.

For some, it’s the chance to catch up with friends and family, whereas others prefer to enjoy food with a rich smoky flavor, kick back and relax.

However, to get the most from a BBQ, it is worthwhile to learn about the different meats, and what to expect during preparation.

Beef brisket is one of the most popular meats associated with BBQ, but could be considered a challenge for newcomers. Fortunately, the preparation of brisket is straightforward and can be enjoyed in many ways.

The following is an overview of what beef brisket is, how it should be prepared, and a breakdown of the different cuts available.

What Part of the Cow is Beef Brisket?

Beef brisket is taken from the breast or lower chest of the cow. It is commonly used by those who enjoy BBQ as it can be cooked for hours without becoming dry.

Generally, a large cut of meat, the brisket weighs between three and eight pounds and contains a lot of connective tissue. Because of this, many cooks will divide the brisket into two, although there are other benefits in doing this.

As well as being a popular choice among BBQ enthusiasts, the meant can also be braised, smoked, and brined, and used to create corned beef and pastrami.

When cooked without seasoning, the meat will contain a strong beef flavor, but the final taste can depend on the cooking method and the seasoning used.

Although there is meat similar to beef brisket, including chuck roast, there is no other name for beef brisket. However, it is common to hear people refer to the “point” and the “flat”.

These two cuts are also referred to by other names. So, while there is no other name for beef brisket, there may be several for the cuts.

Point vs Flat: What is The Difference?

The flat cut is leaner and can also be referred to as the first cut. In contrast to the point, the flat contains no deckle.

There can be different opinions which cut is best for BBQ, point or flat? The reality is both can be used effectively, depending on the type of food you want to prepare.

As the point contains a lot of fat, there will be more flavor, but less meat. This means the point cut is often used to prepare burgers and dishes with shredded meats.

The flat offers more meat, and the leaner cut makes it perfect for preparing sandwiches. Of course, many will want to cook both cuts, but those with little time may have to choose between the two cuts.

In short, the best cut varies by personal preference. So, if you’re cooking brisket for the first time, you may need to try both cuts to find one that suits you.

How Do You Prepare Beef Brisket?

When preparing beef brisket, the first thing to determine is whether the brisket needs to be split. In many instances, the brisket will be large and heavy, so splitting it into two means the preparation process is easier.

The two cuts are joined by a fatty line, so this needs to be cut through to separate the cuts. There may be some excess fat attached to each cut after, so this will also need to be trimmed.

Those wanting to prepare beef brisket with their BBQ should start with a temperature of 230°F. The beef brisket then needs to be sprayed with water on both sides.

The fattiest side of the meat needs to be placed on the barbecue, and the lid should be shut.

There was once a time when pellet grills were expensive, but a lot has changed in recent years. As well as affordable standard pellet grills, there are also several portable models available.

A pellet grill is the perfect way of smoking brisket, as it allows BBQ enthusiasts to introduce unique flavors to their food. Some of the wood pellets available include oak, maple, and apple.

If you’re ready to get started with smoking your beef brisket, choose your favorite wood pellets and prepare your meat as you would with a conventional barbecue.

How Do You Season Beef Brisket?

Another reason why beef brisket is so popular among barbecue enthusiasts is because of the multitude of options available when adding flavor and character.

For the most part, those cooking beef brisket should marinate or rub the food before cooking.

There are several options available when seasoning brisket, and there is even an option that can speed up the marination process.

Rubs are a mix of ingredients and seasoning that are combined to allow fans of brisket to enjoy new flavors. There are thousands of options available, including Carolina Rub, Mustard Rub, and Barbecue Spice Rub.

Regardless of the rub you decide to use, you should apply and refrigerate for at least 12 hours, although some advise leaving as long as 24 hours.

This is still the case if only adding salt and pepper. Simply applying before cooking can mean the rub is not given a chance to absorb into the meat.

When cooking brisket, the focus is flavor. Being generous with the rub ensures that you’re getting the best possible taste in every instance.

Marinades are essentially seasoned liquids that add flavor to the meat in a similar way to rubs. When marinating brisket, it is advised to leave for at least six hours, but no longer than 24.

If meat is marinated too long, the fibers of the meat can start to break down, so monitoring the marinating is of the utmost importance.

Injecting meat is a way of marinating the meat from the inside. and is considered the quickest way of seasoning food. The method will require the use of a dedicated marinade injector.

Although this is a quick way, using rub or marinade for a long duration will likely yield better results.

However, those finding themselves with little time will find that the injection method can still produce great-tasting brisket within a smaller time frame.

How Long Should Beef Brisket Be Cooked For?

There can be several factors that affect the overall cooking time, but general guidelines for beef brisket state that one pound requires a cooking time of between 30 and 60 minutes.

So the cooking of a whole brisket can be a time-consuming process.

However, the finished result can make the investment of time worthwhile, especially for those with a passion for delicious smoked meats.

How To Tell When Beef Brisket Is Cooked? Many people have talent when determining whether meat is cooked or not, but those wanting reassurance should invest in a reliable thermometer.

When the thermometer is injected into the meat, it should have the same sensation of sliding into butter.

The ideal temperature for beef brisket is between 195°F and 215°F, and those cooking the meat should note that the cooking can continue when resting the meat.

It is advised to let beef brisket rest for at least 30 minutes before consuming, although many find the sweet spot is between one and two hours.

When preparing delicious beef brisket, it is often consumed within hours. However, there will be those wanting to extend the enjoyment of their delicious meat.

Smoked beef brisket can be refrigerated for four to five days, but it cannot sit at room temperature for too long. Because of this, those storing brisket should aim to refrigerate leftovers within two hours in an airtight container.

If the brisket is stored with a sauce, the lifespan is reduced to two days. Those searching for more longevity can freeze leftovers.

When freezing beef brisket, you should aim to consume it within three months. Although it is possible to store longer, many will find that the taste of the mate can deteriorate the longer it is frozen.

When compared to hot dogs and burgers, the preparation of beef brisket can seem complicated, but is often easier than many think.

However, you should be prepared for a long cooking time, and aim to marinate or rub the meat 24 hours before preparation. It is also advisable to decide which cut you will be cooking if not preparing the whole brisket.

It is also important to ensure that you have the right tools to hand, which can include the following. Smike Pellets; Thermometer and Aluminum Foil.

Despite beef brisket being a challenge, it is an enjoyable one, and it won’t be long before the beef brisket is among your favorite BBQ meats.

9 Reasons Why Weber Grills So Expensive?